From January 22nd to January 24th, 2017 the 42th winter edition of the Fancy Food Show took place in San Francisco, California, more precisely at the Moscone Center . The summer edition will take place at Jacob Javits Center in New York City at the end of June. It’s considered the biggest and most important food and wine specialties show on the west coast. In 2016 favored the gathering of 30000 industry professionals and 1400 exhibitors from over 30 countries. This year has been as good as last year , with more than 33,000 industry professionals and tastemakers there to show their preferences by tasting innovative and unique products. This fair is an extra occasion for discovering new products and new producers, in addition to the latest trends for 2017 by the Winter Fancy Food Show. There is also the possibility for professionals to expand their network of contacts and take off the career with conferences, workshops and tastings in the An Education Premium Pass space. More than 1,400 top brands of products at the big event have been counted. Coming from all over the world, they met together to confront the largest showcase of West Coast food specialties. There was the possibility to learn from the best, observe the industry in the specific and discuss relevant topics to look for new ideas and to grow new businesses.

The fair has been full of events open to everybody, in addition to the 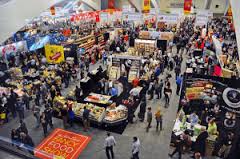 pavilions of the professional sectors. On Sunday 22, for example, the Sunday Night Party was planned, full of entertainment and tastings such as the opening of Bon Appetit, the best restaurant in the Bay. Not to mention the splendid landscape and cultural heritage that accompanies San Francisco and its food history in every corner. Furthermore, it has been possible to participate in the Buyer Program Key, the VIP program for the most qualified retailer, caterer, distributors and buyers. It was designed to facilitate private encounters between buyers and their producer partners.

This year’s Winter Fancy Food Show in San Francisco was different. Instead of tons of fads that come and go, the show proved that the desires and choices of the American consumers have been consolidated and some trends might be here to stay. However, there have been some interesting products launched during the fair. For example, Krave, in collaboration with the Culinary Institute of America, debuted its Krave stick. The three flavors available of the Krave stick are a combinations of turkey, beef or pork with beans and sweet potatoes. Krave also launched their bars that 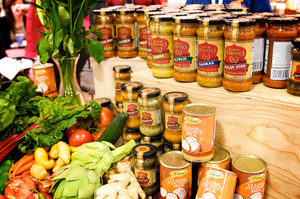 combine the flavor of meat, quinoa and dried fruit. Epic Provisions introduced to the market their strips from Wagyu beef, venison, turkey and salmon. Numi Organic Tea debuted their Golden Latte mixes in two delicious blends, Turmeric Chai and Turmeric Cocoa. Califia Farms introduced the Ginger Almondmilk Turmeric spice blend. The Way Better Snacks‘ Chipotle Barbeque made its debut in this year Winter Fancy Food fair, with sweet purple potato, in two new flavors: Sea Salt with a Hint of Cracked Pepper and Black Bean with a Hint of Roasted Garlic. Siete Tortilla Chips launched the grain free tortilla chips made with coconut, cassava and almond flours. The Lime Grain Free Tortilla Chips, still by Siete Trotilla Chips, was one of the most demanded flavor during the fair. The Powdered Sugar Cannoli Chips and Cinnamon & Sugar Cannoli Chips are the two available flavors of the innovative product, the Cannoli Chips, inspired by the Italian Cannoli, that made their debut in the fair. Blue Planet Chocolates introduced their Superfoods Chocolate Squares that consist of nutrient ingredients like baobab and chia enhanced with probiotics. The Superfoods Chocolate Square flavors available are: Espresso, Blueberry & Chia, , and Cinnamon & Chia and Cocoa Nib. These are just a few examples of the innovative and interesting products launched during the 2017 Winter Fancy Food Show.