After the successful pavilion at Expo2015 and an extraordinary edition in 2016, Cibus becomes annual: in odd years it will be held Cibus Connect,an unique opportunity to discover the products of the best Food and Retail companies.

The first edition of this innovative fair took place on 12 and 13 April, with a preview on 11 and 12 April, in Parma. It combined the exposure of new italian food products with the chance to meet foreign buyers and the opportunity to improve market strategies. Organized by Fiere di Parma and Federalimentare, Cibus Connect had place the same week of Vinitaly and, thanks to an agreement signed with Veronafiere, it brought to Parma international buyers who could scheduled a visit to both Vinitaly and Cibus Connect. Both appointments were part of the project , for the promotion and discovery of territories and companies for foreign buyers in the “Discover the Authentic Italian flavor” program, promoted by Ice Agency.

“Cibus,” said Luigi Scordamaglia, president of Federalimentare , “wants to convey the added value of Italian agro-food“. Over the past six years, exports increased by more than 26%, but still have some improvement margins.
This is a short fair with a new format: two days, 500 exhibitors (not only big companies but also the ones selected by Slow Food), two pavilions and nearly one thousand buyers. The event saw hundreds of buyers from the United States, Asia, Europe and the protagonists of distribution in Italy. Among the exhibitors, there was a space totally dedicated to a group of about 100 niche producers in a Slow Food area, with the aim of opening new market opportunities for small companies.

Two exhibition halls: one dedicated to the fresh food and the 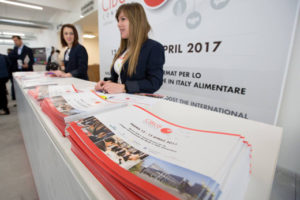 other one to grocery. In a multifunctional area there were pre-installed stands where cooking shows and workshops have been held.  Numerous workshops on trends in various sectors of trade in the USA, Asia, Europe and Italy, including those organized by: Nomisma-Crif, Agrifood Monitor, Progressive Grocer, Gourmet Retailer, Lsa, Lebensmittel Zeitung, Confimprese.
Among all the workshp, Italianfood.net organized one where the opportunities for Italian suppliers to explore the foreign markets were analyzed both through the international network launched by Coop Italia a year ago (Coop Italian Food) and through the digital platforms of Amazon , Alibaba and Ocado. Ocado analyzed the project made in UK by the Consorzio Italia del Gusto that brings together some of the most important brand of Made in Italy food.
Also, Slow Food’s producers presented the project of the Agrifood One Investment Fund, developed with Garnell, a Milanese group active in private equity and corporate finance, with the aim of promoting and enhancing the real economy, sustainability and innovation in the Italian agri-food sector. The advice offered by Slow Food Italia will allow to verify the economic, social and environmental sustainability of potential investment projects. 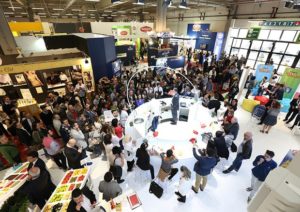 In addition, there have been a two-day event organized by La Casa Europea Ambrosetti. At 17.30 of the first and the second day, the Forum on “Placement of Made in Italy agri-food in relation to the international evolution of consumption” took place , with the support of Barilla Center Food Nutrition and the technical contribution of The European House – Ambrosetti. Among the invited institutions and experts : Guido Barilla, Marco Lavazza, Giampiero Calzolari (Granarolo), Francesco Mutti, Alberto Balocco, Paolo Zanetti, Jean Marc Bernier, Luigi Scordamaglia (Federalimentare), Michele Scannavini (Ice),Valerio De Molli (TEH-Ambrosetti) and numerous top-level executives of foreign chains.

Cibus Connect was also a meeting point for the Italian agri-food community and programming the next edition of Cibus 2018. The appointment is scheduled for 7th to 10th May 2018, in Parma.